San Diego, CA – The American Association of Crop Insurers (AACI) released a report titled “AACI in Action: A Year in Review.” The report highlighted its important advocacy efforts over the last year, including policy victories such as the bipartisan enactment of the 2018 Farm Bill with a strong crop insurance title.

Click on the image below to read the full report. 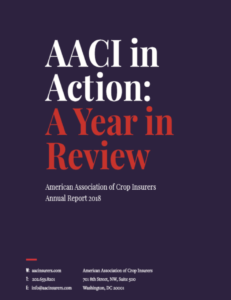 Other fast facts released during the convention: